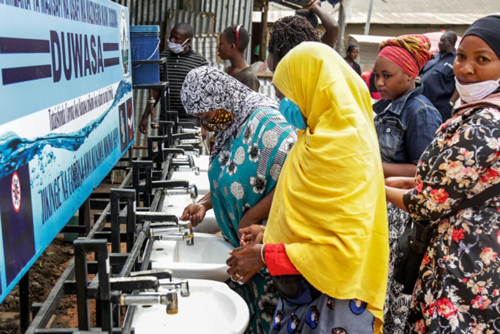 People use a hand-washing station installed for members of the public entering a market in Dodoma, Tanzania on May 18, 2020. AP
By Tom Odula / AP
(Nairobi, Kenya) — On just one day this month, 50 Tanzanian truck drivers tested positive for the coronavirus after crossing into neighboring Kenya. Back home, their president insists that Tanzania has defeated the disease through prayer.
All the while, President John Magufuli has led a crackdown on anyone who dares raise concerns about the virus’s spread in his East African country or the government’s response to it. Critics have been arrested, and opposition politicians and rights activists say their phones are being tapped.
The country’s number of confirmed virus cases hasn’t changed for three weeks, and the international community is openly worrying that Tanzania’s government is hiding the true scale of the pandemic. Just over 500 cases have been reported in a country of nearly 60 million people.
While many African countries have been praised for their response to the coronavirus, Tanzania is the most dramatic exception, run by a president who questions — or fires — his own health experts and has refused to limit people’s movements, saying the economy is the priority.  Read more >>
Posted by Anthony Derek Catalano at 6:17 AM