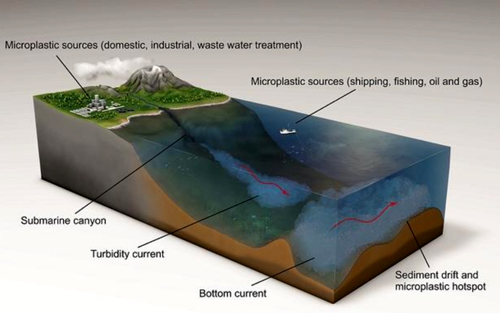 A graphic illustrating the transportation of microplastics by currents along the seafloor.
UNIVERSITY OF MANCHESTER

Researchers have uncovered the highest-ever concentration of microplastics on the seafloor. According to a new study in the journal Science, scientists recently found 1.9 million pieces in an area of about 11 square feet in the Mediterranean Sea.

Over 10 million tons of plastic waste enter oceans each year — but the visible floating plastic that has led to anti-straw and anti-plastic bag movements accounts for less than 1% of the ocean's total plastic.

The other 99% is thought to live in the deep ocean — and the new study helps to explain how it ends up there. Researchers were able to track deep-sea currents and show how they act like "conveyor belts" to transport microplastics across the seafloor.  Read more >>
Posted by Anthony Derek Catalano at 7:17 AM