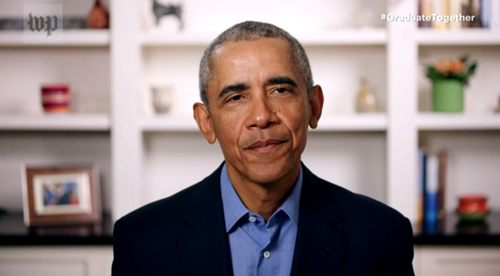 “If the world is going to get better, it’s up to you,” former president Barack Obama said in his address to graduating high school students on May 16. (Blair Guild/The Washington Post)

By Michael Scherer and Katie Mettler

Former president Barack Obama criticized the nation’s leaders for bungling their handling of the coronavirus pandemic Saturday, accusing them in twin commencement addresses of not “even pretending” to be in charge and asking the wrong questions.

The comments came in a speech to high school graduates broadcast by major television networks and a similar streamed speech for graduates of 74 historically black colleges and universities across the United States, which also included his first public comments on the killing of Ahmaud Arbery, a 25-year-old black man shot when two white men attempted to stop him while he was jogging near his hometown of Brunswick, Ga.

Obama did not mention his successor, President Trump, by name. But the comments echoed criticism of the Trump administration that Obama leveled last month in a video endorsement of former vice president Joe Biden. Obama said then that the pandemic had shown that “having leaders who are informed and honest and seek to bring people together” matters.  Read more >>
Posted by Anthony Derek Catalano at 4:04 PM