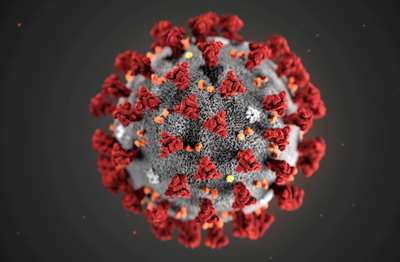 The ultrastructural morphology exhibited by the 2019 Novel Coronavirus (2019-nCoV), which was identified as the cause of an outbreak of respiratory illness first detected in Wuhan, China, is seen in an illustration released by the Centers for Disease Control and Prevention (CDC) in Atlanta, Georgia, U.S. January 29, 2020. Alissa Eckert, MS; Dan Higgins, MAM/CDC/Handout via REUTERS.

LONDON (Reuters) - A genetic study of samples from more than 7,500 people infected with COVID-19 suggests the new coronavirus spread quickly around the world after it emerged in China sometime between October and December last year, scientists said on Wednesday.

Scientists at University College London’s Genetics Institute found almost 200 recurrent genetic mutations of the new coronavirus - SARS-CoV-2 - which the UCL researchers said showed how it is adapting to its human hosts as it spreads.

“Phylogenetic estimates support that the COVID-2 pandemic started sometime around Oct. 6, 2019 to Dec. 11, 2019, which corresponds to the time of the host jump into humans,” the research team, co-led by Francois Balloux, wrote in a study published in the journal Infection, Genetics and Evolution.

Balloux said the analysis also found that the virus was and is mutating, as normally happens with viruses, and that a large proportion of the global genetic diversity of the virus causing COVID-19 was found in all of the hardest-hit countries.

That suggests SARS-CoV-2 was being transmitted extensively around the world from early on in the epidemic, he said.  Read more >>
Posted by Anthony Derek Catalano at 5:10 AM