Meet the Man Who Started the Illuminati

How did a Bavarian professor end up creating a group that would be at the center of two centuries of conspiracy theories? 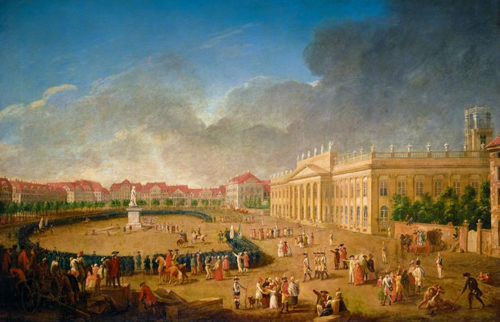 Kassel in 1783, the capital of the Protestant state of Hesse, whose Prince Karl was one of many high-profile figures linked to the Illuminati. Image courtesy Bridgeman/ACI, Oil painting by J. H. Tischbein

The 18th-century German thinker Adam Weishaupt would have been stunned if he had known his ideas would one day fuel global conspiracy theories, and inspire best-selling novels and blockbuster films.

Until he was 36, the vast majority of his compatriots would have been equally stunned to discover that this outwardly respectable professor was a dangerous enemy of the state, whose secret society, the Illuminati, was seen to threaten the very fabric of society.

Born in 1748 in Ingolstadt, a city in the Electorate of Bavaria (now part of modern-day Germany), Weishaupt was a descendant of Jewish converts to Christianity. Orphaned at a young age, his scholarly uncle took care of his education, and enrolled him in a Jesuit school. After completing his studies, Weishaupt became a professor of natural and canon law at the University of Ingolstadt, married, and started a family. On the surface, it was a conventional enough career—until 1784 when the Bavarian state learned of his incendiary ideas.

A closer look at his upbringing, however, reveals that Weishaupt always had a restless mind. As a boy he was an avid reader, consuming books by the latest French Enlightenment philosophers in his uncle’s library. Bavaria at that time was deeply conservative and Catholic. Weishaupt was not the only one who believed that the monarchy and the church were repressing freedom of thought.

Convinced that religious ideas were no longer an adequate belief system to govern modern societies, he decided to find another form of “illumination,” a set of ideas and practices that could be applied to radically change the way European states were run.  Read more >>
Posted by Anthony Derek Catalano at 6:59 AM