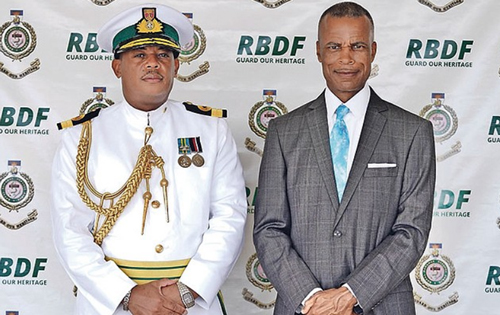 RAYMOND King, left, was officially sworn in as the newest commander of the RBDF yesterday, taking over from Tellis Bethel. Photo: Terrel W Carey Sr/Tribune Staff

RAYMOND King was officially sworn in as the newest commander of the Royal Bahamas Defence Force yesterday, becoming the eighth person in the country to have attained the prestigious rank.

The change of command ceremony, which was held at the RBDF Coral Harbour Base, was attended by Governor General Cornelius A Smith, Prime Minister Dr Hubert Minnis and Minister of National Security Marvin Dames.

Guests were limited at yesterday’s ceremony in view of the country’s social distancing policies amid the COVID-19 pandemic.

While congratulating Commodore King on his newest role, Dr Minnis noted that the new commander takes over at a pivotal time in the country’s history.  Read more >>
Posted by Anthony Derek Catalano at 6:37 AM