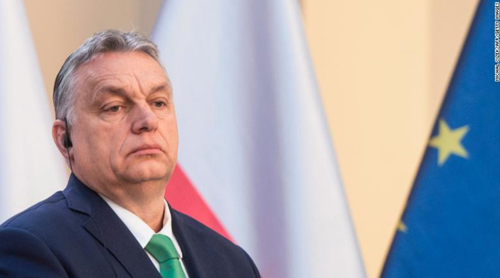 Hungary's Prime Minister Viktor Orban at a news conference on the coronavirus on March 4.

(CNN) - Hungary has banned people from legally changing gender, in a move rights groups said could lead to further intolerance and discrimination against the LGBTQ community in the country.

The parliament voted Tuesday to stop transgender and intersex people from changing their gender on identity documents.

Lawmakers voted -- with 134 votes in favor, 56 votes against and four abstentions -- to define gender on the basis of "sex at birth," as registered on a birth certificate.

Amnesty International researcher Krisztina Tamás-Sáróy said in a statement published online: "This decision pushes Hungary back towards the dark ages and tramples the rights of transgender and intersex people. It will not only expose them to further discrimination but will also deepen an already intolerant and hostile environment faced by the LGBTI community."  Read more >>
Posted by Anthony Derek Catalano at 5:14 AM