Health workers fighting coronavirus around the world threatened by violence

Fear and misinformation fuel worldwide attacks attacks against some who are risking their lives to save their fellow human beings from disease. 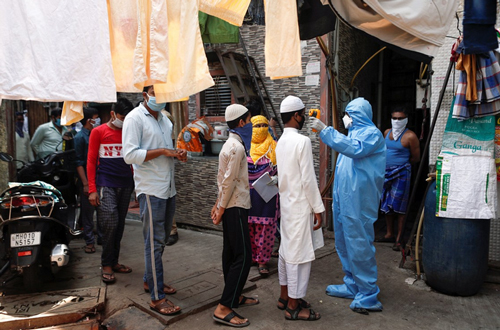 A doctor scans people in Dharavi in Mumbai, India, one of Asia's largest slums, with an infrared thermometer to check their temperatures as precaution against the spread of the coronavirus on April 11. Francis Mascarenhas / Reuters file

The Indian Medical Association organization launched a campaign last month to raise awareness of the violence faced by health care professionals and to call on the Indian government to act. Sharma said officials have followed through, increasing fines and jail time for those who attack health care workers.

The rate of attacks has slowed, Sharma said. "The government is rising to the occasion. It is no longer a mute spectator. Ultimately, laws are there for every crime," he said.

Katdare said she has continued to work in Indore without problems after local authorities explained to residents what the health care workers were doing.

The increase in attacks worldwide is hard to measure, because many cases go unreported, said Larissa Fast, a researcher at the University of Manchester in England who leads a project tracking attacks on health care workers. "We do have numbers, but we know they are not reflective of the true reality."

The reasons for the attacks vary. Fear is a major player. And rumors from assertions that health care workers are spreading the virus to misinformation about causes or treatments can contribute to violence, Fast said.  Read more >>
Posted by Anthony Derek Catalano at 5:07 AM