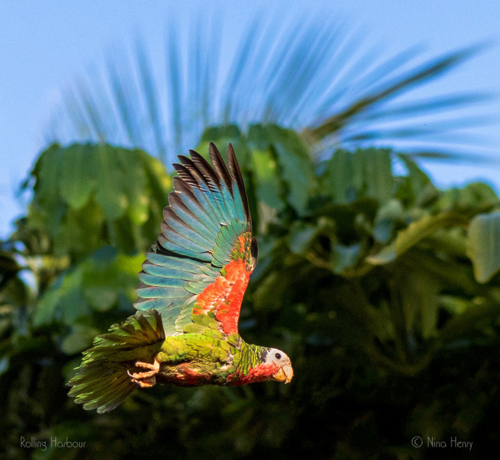 May 15th is – was – Endangered Species Day worldwide. I missed it, of course I did. Typical. So, belatedly, here’s the first of a short series highlighting the Endangered Species of Abaco, Bahamas. It will include a couple of species formerly found on Abaco but now extirpated and hanging on in tiny numbers in specific habitats in the wider Bahamas archipelago. Regrettably, much of the endangerment has been caused, or substantially contributed to, by a dominant species that tends to prize self-interest over broader considerations.

These gorgeous and beloved parrots nest uniquely in limestone ground burrows in the island’s protected National Park in the south of the island, a vast area of pine forest. They are the big success story of Abaco conservation. I was fortunate enough to become tangentially involved with the parrots just as years of patient research and intensive fieldwork were beginning to impact positively on a dwindling and barely sustainable population (fewer than 1000 birds). Adults and particularly the chicks in breeding season were very vulnerable to the attentions of feral cats, non-native racoons and rats. Nests were protected, cameras were deployed, and predators eradicated.  Read more >>
Posted by Anthony Derek Catalano at 4:37 AM