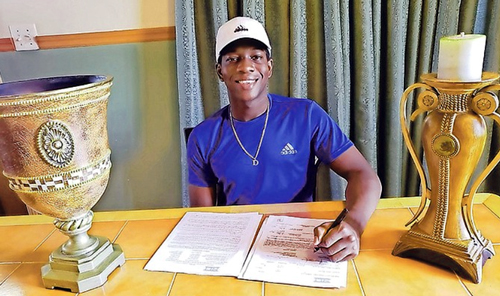 WHILE sitting out a year after graduating from high school, Donte Armbrister made the leap from the junior to the senior ranks last year as a tennis player. Now he is preparing to head off to Hampton, Virginia, to begin his freshman year as a collegian at Hampton University.

The 18-year-old Armbrister received his acceptance letter on April 13 to attend Hampton University, one of the top four black division one schools in the United States, and to play in the Big South Conference. He’s hoping to head off in August to pursue a degree in business management once the coronavirus is cleared up and the Bahamas government opens the border to allow travel.

“I’ve spoken to the head coach and he’s excited to have me come there and I’m excited about going there,” said Armbrister, a southpaw who has received a full athletic scholarship.  Read more >>
Posted by Anthony Derek Catalano at 8:19 AM