Blow Up the Restaurant Industry and Start Over 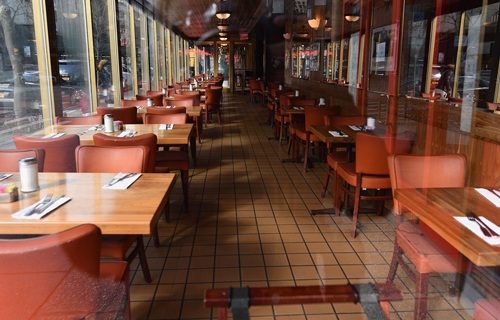 A system that relies on exploitation isn’t one that should survive the pandemic. There’s a better way to feed people and care for workers. Angela Weiss/AFP/Getty Images

March 14 would be the last Saturday shift that Sarah worked, though she didn’t know it at the time. “We were so busy, and everyone that came in was like, ‘I can’t believe how busy y’all are! It’s good that you’re busy,’” Sarah, who asked that I not use her real name, said of the upscale Brooklyn restaurant where she worked as a server until it was shut down due to the pandemic. “And I was like, I don’t wanna be here. I wanna go home.”

Guidelines from the city, both around personal protective gear and sanitation, had been unclear and contradictory. The staff was terrified. “We were watching people cough into their napkins, and I had hives on my hands from washing them so much,” she said. “I was scared out of my mind.” By that Monday, bars and restaurants across the state were shuttered, and Sarah—along with the rest of the waitstaff—was laid off, with the promise that she would be hired again. She hasn’t heard anything from her former bosses since.  Read more >>
Posted by Anthony Derek Catalano at 5:26 AM