Droplets from our coughing, sneezing—and perhaps even talking—travel farther than previously suspected. 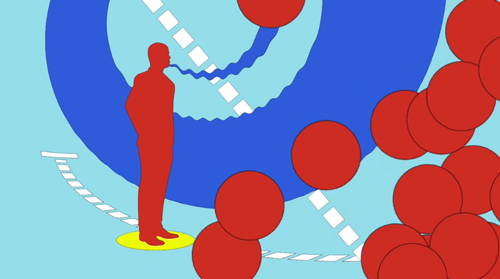 As the world opens back up, even with COVID-19 in an unrelenting swing, one guideline is repeated again and again: Keep six feet of social distance. And this number makes us feel safe because it comes from the authorities. But this number is, according to a new study, inaccurate and flawed.

The World Health Organization recommends a three-foot distance to avoid the potential spread of COVID-19 through droplets in the air, be it from coughing, sneezing, or even speaking. But where does that recommendation come from? According to Quartz, one study that’s nearly 100 years old. In 1934, the Harvard School of Public Health built an apparatus to capture droplets flying from your mouth through the air. The results of that test stand as the status quo today, though the CDC doubles the spans, to recommend six feet of social distance between people.

But a new study published in Physics of Fluids, which used a sophisticated simulation to model the aerosol spray from a cough, is here to challenge both WHO and the CDC’s conventional wisdom. “What we show is we have a significant amount of droplets that can travel beyond [six feet] in a short period of time,” says Dimitris Drikakis, professor at University of Nicosia, Cyprus. “This is something we need to take into account.”  Read more >>
Posted by Anthony Derek Catalano at 5:38 AM