The affected schools are being closed immediately. 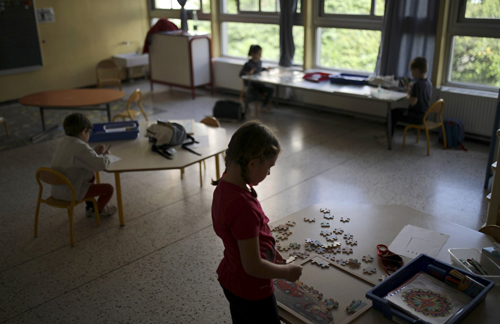 Children social distance in a classroom at the Saint-Tronc Castelroc primary school in Marseille, France, on May 14, 2020.Daniel Cole / AP

By The Associated Press

PARIS — Just one week after a third of French schoolchildren went back to school in an easing of the coronavirus lockdown, there’s been a worrying flareup of about 70 COVID-19 cases linked to schools.

Some lower grades in schools were opened last week and a further 150,000 junior high students went back to the classroom Monday as further restrictions were loosened by the government. The move initially spelled relief: the end of homeschooling for hundreds of thousands of exhausted French parents, many of whom were also working from home.

But French Education minister Jean-Michel Blanquer sounded the alarm Monday, telling French radio RTL that the return has put some children in new danger of contamination. He said the affected schools are being closed immediately. French media reported that seven schools in northern France were closed.  Read more >>
Posted by Anthony Derek Catalano at 4:24 PM