White House prepares for US death toll from coronavirus to exceed 100,000 and warns next 30 days are crucial 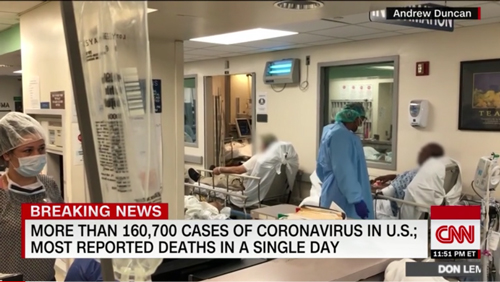 (CNN) - White House officials predicted a stark US death toll of more than 100,000 people from coronavirus, saying measures working to curb the spread of the virus are the only hope for keeping that total from rising further.

Those measures could be especially valuable now that data shows as many as one-fourth of those infected with the virus could be walking around with no symptoms and transmitting it, according to the head of the US Centers of Disease Control and Prevention.

"One of the (pieces of) information that we have pretty much confirmed now is that a significant number of individuals that are infected actually remain asymptomatic. That may be as many as 25%," CDC Director Dr. Robert Redfield told NPR. He did not elaborate on how he reached that number. CNN has reached out to the CDC.

At least 185,499 Americans have so far been infected, according to CNN's tally. At least 3,834 people have died --- about 830 of those deaths were reported Tuesday, the most reported US deaths in a single day.
By mid-April, when the virus is projected to hit the country the hardest, as many as 2,000 Americans could die each day, a model cited by the White House shows.  Read more >>
Posted by Anthony Derek Catalano at 5:13 AM