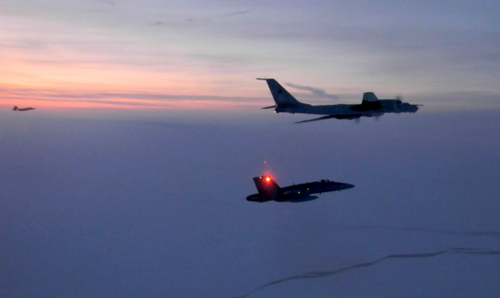 In this Monday, March 9, 2020, photo released by the North American Aerospace Defense Command (NORAD), a Russian Tu-142 maritime reconnaissance aircraft, top right, is intercepted near the Alaska coastline. U.S. and Canadian aircraft intercepted and escorted two Russian jets that flew over the Beaufort Sea near the Alaska coastline, military officials said Tuesday. The Russian Tu-142 maritime reconnaissance aircraft were escorted by F-22 and CF-18 planes, the North American Aerospace Defense Command said in a release. The Russian jets never left international airspace during the duration of the four-hour flight on Monday, but did come within 50 miles of the Alaska coast. (North American Aerospace Defense Command via AP) ** FILE **

By Mike Glenn - The Washington Times

On Wednesday, F-22 fighters spotted the Ilyushin-38 maritime patrol aircraft as they flew over the Bering Sea north of the Aleutian Islands. The Rusian turbo-prop airplanes did not enter U.S. or Canadian sovereign territory, officials said.

“This is the latest of several occasions in the past month in which we have intercepted Russian aircraft operating near Alaska and the approaches to our nations,” said Gen. Terrence J. O’Shaughnessy, commanding general of NORAD. “We are and will continue executing our no-fail homeland defense missions with the same capability and capacity we always bring to the fight.”  (source)
Posted by Anthony Derek Catalano at 9:11 AM