The story here isn't just how many people could die. It's how many lives could be saved. 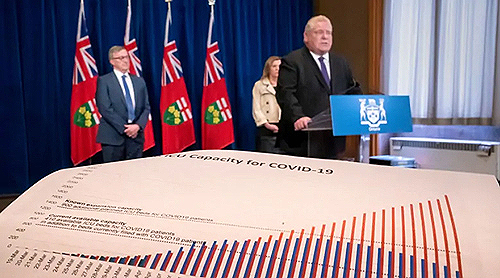 A half-hour into his presentation, Dr. Peter Donnelly reached slide 13.

"I want to turn now to perhaps what might be the most disturbing slide in this deck," the president of Public Health Ontario said, speaking evenly. "I think it's important that we all are robustly realistic about the scale of the challenge that we face."

Slide 13 was a simple bar graph indicating that between 3,000 and 15,000 Ontarians might die as a result of the novel coronavirus pandemic over the next 18 to 24 months — a death toll and a time frame that had not previously been publicized.

In the short term, 1,600 Ontarians could be dead by the end of this month. Eighty thousand people may have contracted COVID-19 by then.

Everyone knew (or should have known) before Friday that lives are at stake and that this could be a long, hard struggle. But Canada's most populous province has now provided an official projection of just how tragic and difficult this could be.  Read more >>
Posted by Anthony Derek Catalano at 10:14 AM