Sweden challenges Trump -- and scientific mainstream -- by refusing to lock down 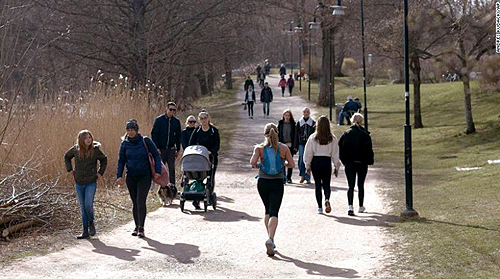 Swedish authorities have allowed a large amount of personal freedom unlike other European countries.

(CNN) - Much of Europe is still on coronavirus lockdown, with severe restrictions on movement and penalties for those who transgress.

But not Sweden. Restaurants and bars are open in the Nordic country, playgrounds and schools too, and the government is relying on voluntary action to stem the spread of Covid-19.
It's a controversial approach, and one that's drawn US President Donald Trump's attention. "Sweden did that, the herd, they call it the herd. Sweden's suffering very, very badly," Trump said on Tuesday.

But the Swedish government is confident its policy can work. Foreign Minister Ann Linde told Swedish TV on Wednesday that Trump was "factually wrong" to suggest that Sweden was following the "herd immunity" theory -- of letting enough people catch the virus while protecting the vulnerable, meaning a country's population builds up immunity against the disease.

Sweden's strategy, she said, was: "No lockdown and we rely very much on people taking responsibility themselves."  Read more >>
Posted by Anthony Derek Catalano at 8:43 AM