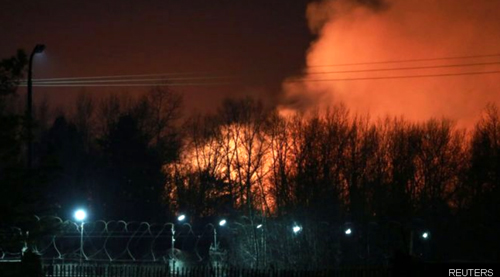 Smoke rises from a fire that broke out at the prison after a riot.

A fire has engulfed large parts of a prison in Russia's Siberia region following a riot by inmates who accused guards of mistreating them.

Authorities say inmates at the high-security Penal Colony No 15 attacked a guard who had tried to help a prisoner bleeding from a self-inflicted wound.

Several prisoners slashed their own arms in protest at being beaten by a guard as punishment, activists said.

Some Russian human rights websites were down on Saturday.

Activists say the lack of scrutiny by outsiders gives guards a free rein to use violence.

Officials said the unrest in the city of Angarsk, which broke out on Thursday, was now under control and an investigation had been launched.

Russian jails have been in lockdown since the end of last month to prevent the spread of coronavirus.  Read more >>
Posted by Anthony Derek Catalano at 8:21 AM