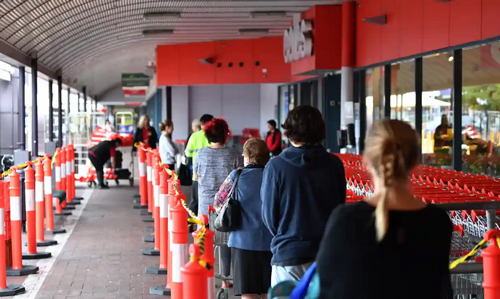 Supermarkets Coles, Woolworths and IGA say they will work to manage queues at peak times into Easter weekend amid the coronavirus. Photograph: David Mariuz/EPA

Long lines have formed outside supermarkets after Coles, Woolworths and IGA began limiting the number of customers inside stores in a bid to allow physical distancing and keep flattening the curve of Covid-19 infections during the Easter rush.

The Thursday before Easter is traditionally one of the busiest days for supermarkets, as people stock up for the weekend.

However, in an attempt to avoid overcrowding, a number of Australian supermarkets have instituted ‘one in one out’ policies.  Read more >>
Posted by Anthony Derek Catalano at 5:48 AM