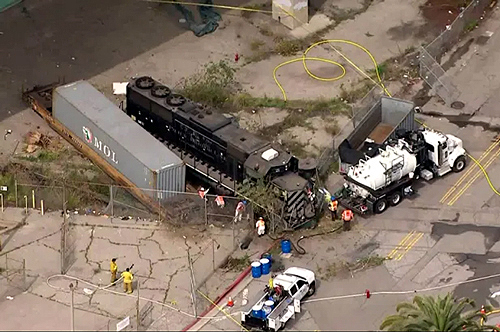 A Los Angeles train engineer was arrested Wednesday for allegedly derailing a locomotive at high speed near the Navy hospital ship USNS Mercy — believing a conspiracy theory that the government is covering up the vessel’s true purpose, federal authorities said.

Eduardo Moreno, 44, of San Pedro, is accused of ramming the locomotive through two barriers at the end of tracks Tuesday and coming to rest in a gravel lot about 250 yards from the hospital ship, according to the Department of Justice.

Nobody was injured. A nearby California Highway Patrol officer witnessed the crash.  Read more >>
Posted by Anthony Derek Catalano at 12:09 PM