Italy Is Sending Another Warning

This is what a country a month into lockdown looks like: desperate, hungry and scared. 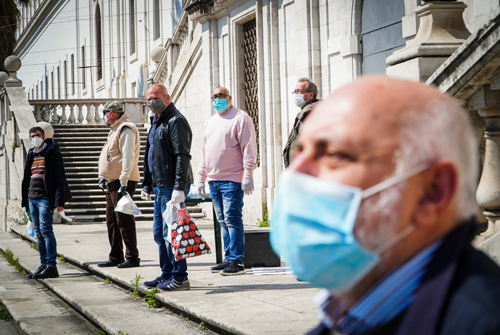 By By Bethan Jones and Fabio Montale

NAPLES, Italy — “The desperation is taking its toll.”

That’s what Armando Gallinari, a father of five who runs a small flower shop in the north of Naples, told us. His shop has been closed for nearly a month.

“Since then I’ve had nothing coming in at all,” he said. “As of yet, I haven’t received any government assistance. We have nowhere to turn.”

Everyone knows Italy’s story by now. The first European nation to be hit hard by the coronavirus, it has become a harbinger for the rest of Europe and America. First, there was the lockdown. Then the sight of a health care system stretched to the point of collapse and the terror of a rising death count.

Now, nearly a month after the country went into lockdown, Italy is sending another warning. The economy is in trouble, bound for a major contraction. And the precariously situated workers — self-employed, seasonal, informal — are suffering the most. It’s not clear how much longer they can survive.  Read more >>
Posted by Anthony Derek Catalano at 6:16 AM