Is This Why Detroiters are Dying from the Coronavirus? 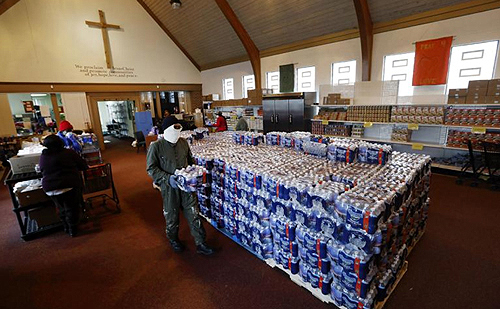 Maureen Taylor first learned about the existence of COVID-19 in January, scrolling through the BBC website. A few weeks later, a contact at the United Auto Workers told her that Ford’s factories in China were shut down because of the virus. “So Ford knew,” said Taylor, “Ford knew in February.”

Then news reports about COVID-19 began appearing on local television. Avoid gathering in groups, the newscasters said. Stay isolated and don’t go into work if you are feeling ill. Above all, wash your hands.

Taylor couldn’t believe what she was seeing. As chair of the Michigan Welfare Rights Organization (MWRO), an anti-poverty group with roots in the civil rights movement and the Poor People’s Campaign, and a founding member of the People’s Water Board, Taylor knew far too much about who in Michigan was actually able to follow this advice.

In 2019, the Detroit Water and Sewerage Department (DWSD) cut service to 23,473 homes whose occupants had fallen behind on their bills—a 44 percent increase over the year before. In January of 2020, an investigative report by Bridge Magazine found that 9,500 of those homes were still without water (DWSD disputed this, saying that according to their own internal documents, the number was about half that). Even after water was shut off, DWSD charged each household $27 a month for being connected to the city sewer system.  Read more >>
Posted by Anthony Derek Catalano at 5:09 AM