How does the COVID-19 pandemic compare to the last pandemic?

There are some key differences between the 2009 swine flu and COVID-19, and the response to each of them. 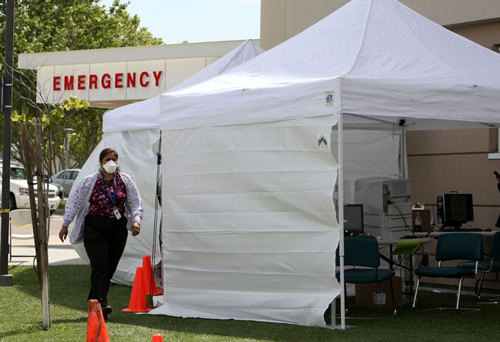 A nurse walking by a triage tent set up outside of the emergency room at Sutter Delta Medical Center in Antioch, California on April 30, 2009. The hospital was preparing for a potential flood of patients worried they might have swine flu. (Image: © Justin Sullivan/Getty Images)

It's been a little over a decade since the world experienced its last pandemic, the 2009 H1N1 swine flu. Between the spring of 2009 and the spring of 2010, the virus infected as many as 1.4 billion people across the globe and killed between 151,700 and 575,400 people, according to the Centers for Disease Protection and Control. Now, the world is in the midst of the COVID-19 pandemic, caused by a novel coronavirus called SARS-CoV-2.

Having been through a pandemic in recent history, it seems reasonable to expect that government agencies in the U.S. would be prepared for the next one. But there are some key differences between the 2009 swine flu and COVID-19, and the response to each of them.

"The 2009 H1N1 pandemic should have been a warning sign," said Steffanie Strathdee, the Associate Dean of Global Health Sciences at the University of California San Diego's Department of Medicine. "It didn't end up being a pandemic that killed millions of people as we feared it would, but it should have been a wake-up call. By all serious estimates, COVID-19 is going to be a major killer."  Read more >>
Posted by Anthony Derek Catalano at 6:53 AM