Crime drops around the world as COVID-19 keeps people inside 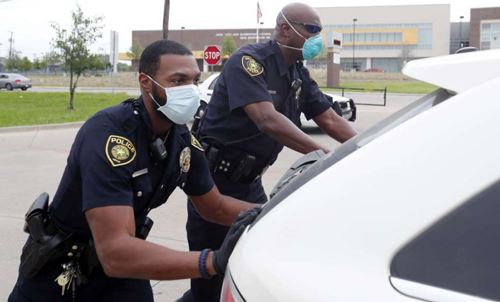 In this April 9, 2020, photo, amid concerns of the spread of COVID-19, Dallas ISD police officers Mylon Taylor, left, and Gary Pierre push a car that ran out of gas while waiting in line for the weekly school meal pick up for students in Dallas. The coronavirus pandemic that has crippled big-box retailers and mom and pop shops worldwide may be making a dent in illicit business, too. (AP Photo/LM Otero)

In Chicago, one of America’s most violent cities, drug arrests have plummeted 42% in the weeks since the city shut down, compared with the same period last year. Part of that decrease, some criminal lawyers say, is that drug dealers have no choice but to wait out the economic slump.

“The feedback I’m getting is that they aren’t able to move, to sell anything anywhere,” said Joseph Lopez, a criminal lawyer in Chicago who represents reputed drug dealers.

Overall, Chicago’s crime declined 10% after the pandemic struck, a trend playing out globally as cities report stunning crime drops in the weeks since measures were put into place to slow the spread of the virus. Even among regions that have the highest levels of violence outside a war zone, fewer people are being killed and fewer robberies are taking place.

Still, law enforcement officials worry about a surge of unreported domestic violence, and what happens when restrictions lift — or go on too long.  Read more >>
Posted by Anthony Derek Catalano at 7:50 AM