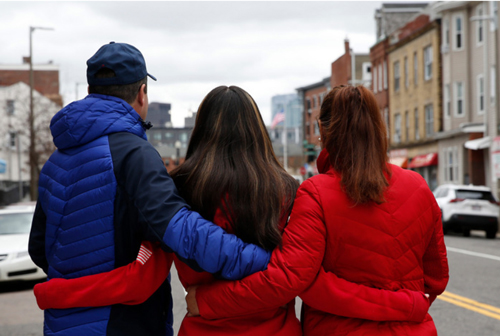 A family of undocumented Bostonians. Both parents lost their jobs in recent weeks. Neither will receive any aid from the bill Congress just passed. Photo: Jessica Rinaldi/Boston Globe via Getty Images

We were in crisis before this crisis. When a novel strain of coronavirus made its presence felt in Wuhan in December, global carbon emissions were hitting record highs. The world’s largest democracy was descending into a kind of fascism, as the world’s most populous nation condemned its Muslim minority to internment camps. A quarter of humanity faced looming water shortages, while hedge funds sought to corner the market on “the oil of the 21st century.” Throughout the West, the labor movements that had once cultivated egalitarian alternatives to ethno-nationalism were declining, while gross wealth inequalities were annually compounding the capacity of billionaires to dominate putatively democratic societies and governments. Progressives are ostensibly defined by their faith in the possibility of social progress. But as of late last year, it was hard for many on the left to look into the future and see a world that wasn’t nasty, brutish, and hot.

And then, the “good times” ended. Now, the world is besieged by a pandemic that threatens to kill 100,000 Americans if we’re lucky before triggering a global economic depression.  Read more >>
Posted by Anthony Derek Catalano at 7:03 AM