2 cruise ships with passengers sick with coronavirus dock in Florida 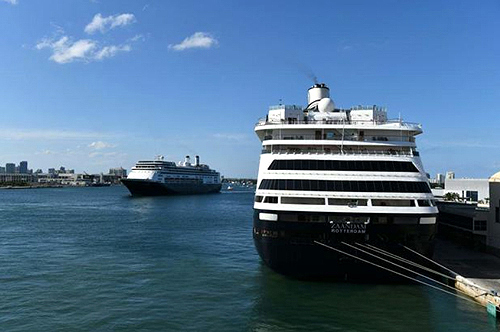 Miami — Two cruise ships carrying passengers stricken with coronavirus have docked in Florida on Thursday. It ends a nightmarish odyssey for some of the passengers, but for others aboard the journey is far from over.

After nearly a month at sea, the Zaandam's grueling voyage ended in Port Everglades. Passenger Val Myntti couldn't wait for it to be over. "We are on pins and needles and we are so excited about it," Myntii told CBS News.

The Rotterdam, which took passengers with no symptoms from the Zaandam, arrived, too. There were a combined 2,300 people on both ships.

At one point, the Zaandam reported 200 sick passengers, nine who tested positive for the virus and four deaths.  Read more >>
Posted by Anthony Derek Catalano at 4:25 AM