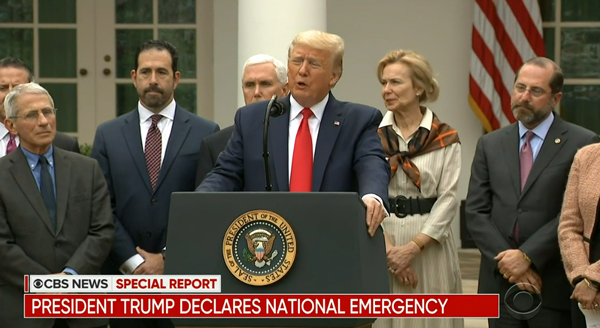 President Trump is declaring a national emergency to address the coronavirus pandemic, he announced during a Rose Garden press conference on Friday afternoon. Stocks surged after Mr. Trump's announcement, with the Dow rising nearly 2,000 points at its close.

Mr. Trump said he does not agree with House Democrats' current legislation to provide financial relief to Americans hardest hit by the virus, complicating the situation on Capitol Hill as lawmakers try to strike a deal.

"To unleash the full power of the federal government in this effort today, I am officially declaring a national emergency," the president announced as he stood alongside top administration officials and company CEOs he met with earlier.

"No resource will be spared, nothing whatsoever," the president told reporters.  Read more >>
Posted by Anthony Derek Catalano at 1:51 PM