Remembering Sir Lynden on what would have been his 90th birthday 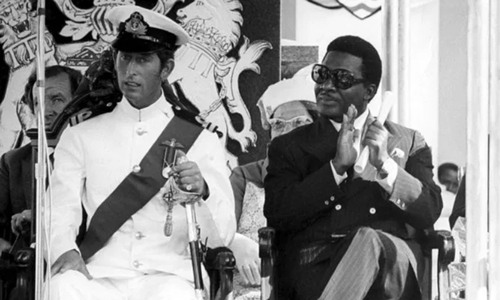 The late Prime Minister Sir Lynden Pindling with Prince Charles during The Bahamas’ independence celebrations in 1973.

WASHINGTON, D. C., March 22, 2020 — Today would have been the 90th birthday of the late Sir Lynden Pindling, the first Prime Minister of The Bahamas, whose name  as leader of the Progressive Libera Party (PLP) during the struggle for majority rule in The Bahamas is enshrined in the history of The Bahamas as a Modern Day Moses.

Those who were around in the 1960s tend to forget what life  was like in The Bahamas when racism was viciously enforced on the same disgraceful level as in the Southern United States, where it was implemented by law, and the younger generation in The Bahamas simply do not want to be reminded that as late at 1962, Black Bahamians were refused admission to the “whites only” Savoy Theatre of Bay Street and the only Blacks working in banks on Bay Street were as janitors or similar low-level jobs.  Read more >>
Posted by Anthony Derek Catalano at 5:52 AM