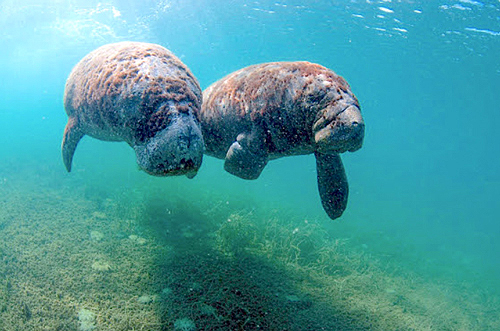 Mrs RH and I are sticking to self-isolation right now (we are fine, but thank you for asking). However I am already breaking my current self-imposed ‘single-picture-and-not-much-writing’ regime with today’s creature feature. The excuse? It is of course the last Wednesday in March and as everyone must know it is Manatee Appreciation Day.

Anyone can (and indeed should) appreciate manatees anywhere at any time, and their contemplation is a way to lift the spirits. They were first found in Abaco waters about a dozen years ago. BMMRO reported their movements and the ongoing research. Later, Bahamian locals enthusiastically followed the lives of Gina, Rita, Georgie, Randy & co; and the calves such as JJ and Sayle (winning name in a public competition). Citizen scientist reports were invaluable to the research. Unsurprisingly, since Hurricane Dorian reports have greatly reduced. Manatees may well still be around but even now, 6 months later, trichechi sightings are sporadic. There are other concerns, after all.  Read more >>
Posted by Anthony Derek Catalano at 4:10 PM