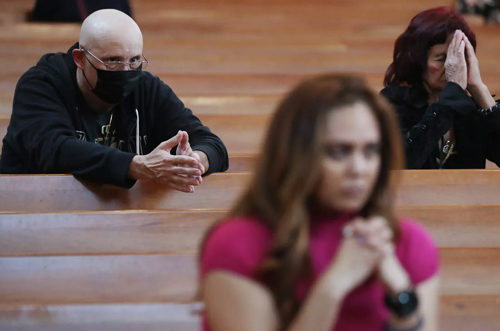 A worshipper wears a mask to protect against coronavirus at the Ash Wednesday services at the Cathedral of Our Lady of the Angels in Los Angeles. Mario Tama/Getty Images

The coronavirus outbreak has caused nearly every religious organization around the world to rethink how it holds worship services, which typically involve people gathering in a confined space and coming into physical contact with each other.

But in majority-Christian nations like the US, the question is most fraught for local churches, as they prepare for Easter (Christianity’s most important holiday, which falls on Sunday, April 12, this year). What’s more, many Christian churches practice the rite of Communion using a “common cup” to share wine among the congregation, which means everybody drinks out of the same chalice.

And even beyond communion rituals, most churches practice some variation of the “passing of the peace” — in which congregants shake hands and wish each other “peace be with you.” During Holy Week, which directly precedes Easter, many churches traditionally wash parishioners’ feet, to replicate a moment from the Bible.

But even outside of official forms of worship, most churches are spaces where there are plenty of handshakes and hugs, before and after services. And that’s to say nothing of other gatherings churches might host, like coffee hours after services, fish fries during Lent, or soup kitchens for those in need.  Read more >>
Posted by Anthony Derek Catalano at 6:57 AM