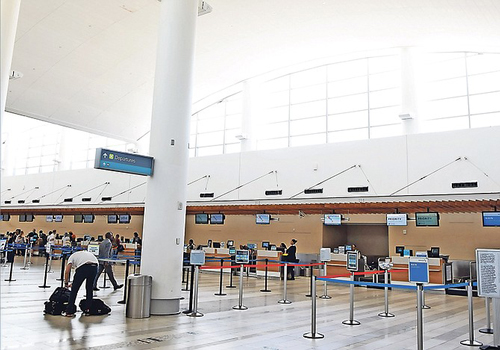 However, he said the woman’s visit is not what prompted the commotion captured in a viral video on Wednesday when staff fled the clinic amid panic over the disease - he said that was a separate incident, with the patient testing negative for the virus in that case.

The news came as the reality of the global coronavirus crisis began to bite home for Bahamians. Some restaurants and tourism businesses now plan to shut their doors. Churches are considering suspending gatherings. Jail visits have been indefinitely suspended and major events like the Bahamas Carnival festival have been postponed.

The US Departures Terminal of the Lynden Pindling Airport provided an eerie glimpse of the impact, with few travellers in the facility during the usually busy season. Up to press time, the first known person in the country with COVID-19 remained the only confirmed or suspected case, according to the Ministry of Health.  Read more >>
Posted by Anthony Derek Catalano at 9:51 AM