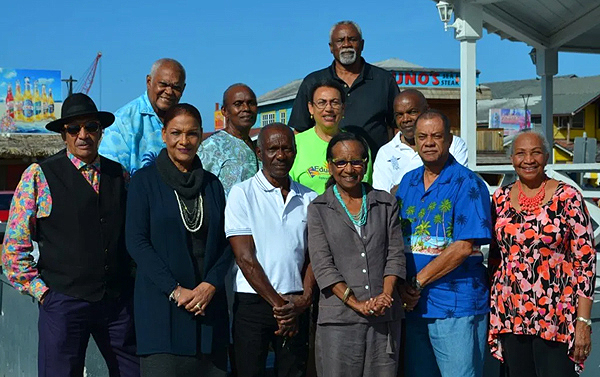 Raphael (Ray) Munnings (font row left), his wife Wendy (front row second from left) and some of Ray’s former classmates at St. John’s College High School at a recent class get together at the Fish Fry  on a Saturday in Nassau, Bahamas. I don’t recognize all of the persons in the photo, but my “little sister” Arlene Nash-Ferguson is center in the second row; Arnold “Bain Boy” Bain, a former outstanding track and field athlete at Howard University in Washington, D.C., in the 1970s, is at center, directly in the back of Arlene; Pharmacist Clinton McCartney of WILMAC Pharmacy is second from right in front row. (Photo by Athama Bowe)

NASSAU, Bahamas — I turned the car radio louder, glorying in the Bahamian music that almost seems to be non-existent on some radio stations at times. It was ‘Funky Nassau’, still catchy after all these years, and that beautiful and so familiar voice sang me right back through the years to where it begun for me. It was 1963, the annual school talent show was approaching, and when Ray Munnings. Oswald Brown, Athama [Box] Bowe and Robert Smith announced that they had signed up to sing, we began to giggle. This was going to be fun, especially if they sounded the way they usually did in Music class, when they were determined to be mischievous and hold the notes longer than everyone else, much to Mrs. Eneas’ chagrin.  Read more >>
Posted by Anthony Derek Catalano at 1:47 PM