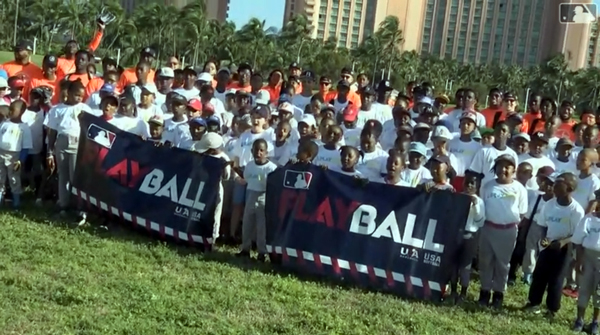 Every year, Major League Baseball's Play Ball initiative grows, expanding to more cities within the United States and around the world. This year, even more kids from all over the globe will be within a stone's throw of MLB's signature youth program, which encourages young people to, quite simply, play ball.

On Friday, MLB rang in the new year with its first Play Ball event, which took place in the Bahamas and involved a slew of former Major Leaguers and current Major League prospects. Hosted by former two-time All-Star catcher Charles Johnson and two current Minor Leaguers who are natives of the Bahamas -- Todd Isaacs (Rockies) and Lucius Fox (Rays) -- this event took place at Paradise Harbor, located in Atlantis Paradise Island property in Nassau.

The event was held in conjunction with the trio's annual Home Run Derby event, scheduled to take place on Saturday.  Read more >>
Posted by Anthony Derek Catalano at 4:23 AM