Hungry for hutia? Our taste for Bahamas’ ‘most peaceable rodent’ shaped its diversity 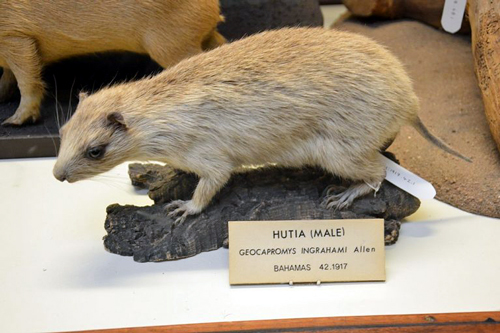 The Bahamian hutia, a nocturnal rodent that grows up to 2 feet long, once lived across the Bahamian archipelago, but today is only found on three small cays.
PHOTO COURTESY OF ILLUSTRATEDJC, CC BY-SA 4.0

The Bahamian hutia, a large Caribbean rodent with a blissed-out disposition, presents a curious case study in how human food preferences can drive biodiversity, sometimes shaping it over 1,000 years.

The hutia, which resembles a bristly beanbag, flourished in the Bahamas for millennia, the islands’ only native terrestrial mammal. Today, only one population of Geocapromys ingrahami remains, divided among the scrubland and limestone cliffs of three small cays, and the species is considered vulnerable by the International Union for Conservation of Nature.

Humans have played a prominent and paradoxical role in the hutia’s boom-to-bust story, according to a new study led by Florida Museum of Natural History researchers.  Read more >>
Posted by Anthony Derek Catalano at 5:25 AM