Though climate change is a crisis, the population threat is even worse

While the Paris climate summit focuses on global warming,
the key issue is the prospect of 10 billion people on Earth 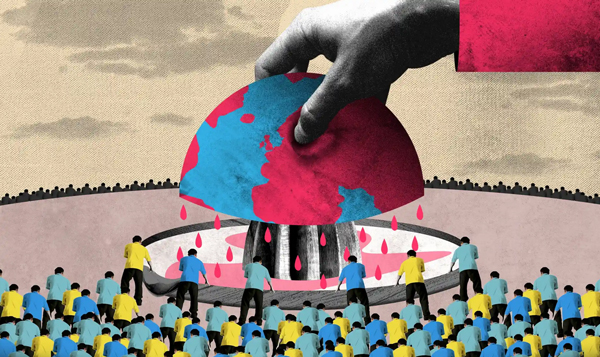 Approximately 70% of all usable water on Earth is now used for food production.
Illustration by Nate Kitch

The perennial cry: we need to talk about climate change. And this week, with world leaders in Paris, we have been. But only up to a point. For the likely impact of the rising global population is almost entirely absent, not only from the debate about climate change, but also from that about loss of biological diversity, food and water security, disease, pollution and energy.

Let’s just remind ourselves of the population statistics of the past half century. In just over half my lifetime, the world’s population has more than doubled, from 3 billion people to now more than 7 billion. The ability to feed some of this growing population has in no small part been a consequence of the advent of the green revolution: that is, the industrialisation and intensification of agriculture and the entire food production system.

Producing all this food requires a lot of water. In fact, approximately 70% of all usable water on Earth is now used for food production. And almost 40% of the entire (ice free) land surface of the planet is now dedicated to agriculture.  Read more >>
Posted by Anthony Derek Catalano at 6:08 AM