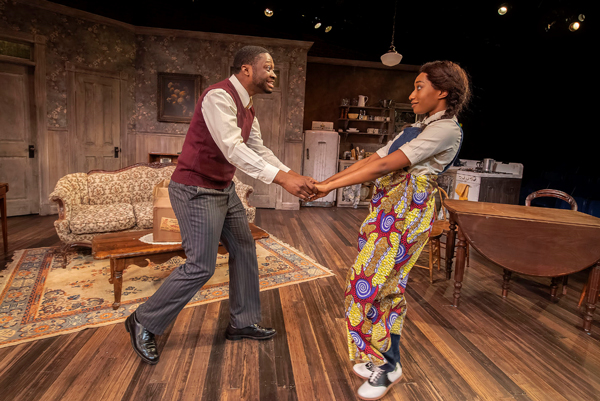 Bahamian actor Jonathan Farrington is receiving rave reviews for his for his role as Joseph Asagi, the Nigerian college student and love interest of the Younger daughter in Lorraine Hansberry’s classic play ‘A Raisin In The Sun’. Photos: Michael Heller

The Hamptons, USA… Once known for his chart-topping gospel songs in his native Bahamas and placing second overall on Canada’s hit reality talent show ‘The Shot’, Jonathan Farrington is wowing American audiences with his theatrical performances. Farrington is receiving rave reviews for his for his role as Joseph Asagi, the Nigerian college student and love interest of the Younger daughter in Lorraine Hansberry’s classic play ‘A Raisin In The Sun’.

In spring 2019, Farrington was awarded the prestigious Lawrence Lagner Award from the American Academy of Dramatic Arts in Manhattan for acting, and in summer, he had the chance to collaborate with Bahamian director Travolta Cooper for a film shot in New York. He is also reviewing opportunities in film and television, noting that it’s about finding the right fit and to keep his focus.

His being cast in this production of ‘A Raisin In the Sun’ further legitimizes him as an actor.

“This is my first equity show,” said Farrington. “Since graduation, I have been auditioning and working nonstop with the goal of getting my equity card and it finally happened. Manifestation!”

Farrington said landing the role in such an iconic play is a dream come true not only because of the significance of the production but because watching the film version as a child made him want to become an actor, especially after seeing a Bahamian legend in the film adaption.

“One of my biggest inspirations is the iconic Sir Sidney Poitier,” said Farrington. “He played the lead role in the original Broadway cast and live film version and when I learned he was Bahamian, that made me want to go after my dreams even more. I remember watching it and saying, ‘Boy, I would love to act in this play someday!’ and here I am. This story is very timely and touching and reminds me of how one who does not have much will fight for their dreams. These characters are so complex and full, and all are fighting for something. This story moves you to so many levels. Lorraine Hansberry wrote a wonder and I’m just honestly so grateful to share this timely story with the world.”

"A Raisin in the Sun” was presented by special arrangement by the Bay Street Theater as a part of their Literature Live program. The educational program which provides free, fully produced professional theatrical performances based on classic American literature used in school curricula.  Featuring professional Equity actors and designers, the program includes post-production talk-backs with the cast as well as a resource guide and lesson plans prepared by BST for teachers to use in the classroom before and after attending the performance, making the performance as enriching for students as possible. Now in its 11th year, Literature Live! has served over 30,000 students from nearly 60 public, private, and homes schools across Long Island stretching from Great Neck to Montauk.
Posted by Anthony Derek Catalano at 2:27 PM