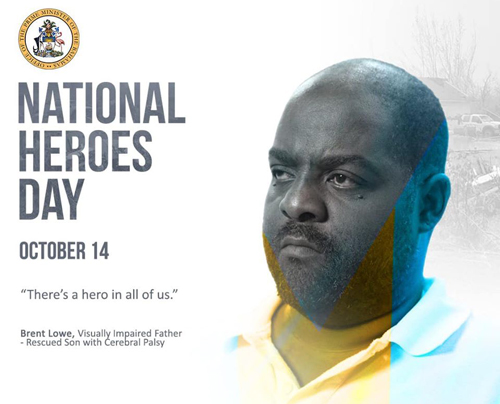 NASSAU, BAHAMAS – The Office of the Prime Minister yesterday unveiled its National Heros social media campaign honoring three Bahamians for their courageous efforts during the passage of Hurricane Dorian.

Under the theme, “There’s a hero in all of us”, the OPM recounted the experiences of Brent Lowe, and responders Michael Gibson, and Allaya Hagigal.

Lowe, who is visually impaired, saved the life of his disabled son as the monster storm beat his home in Murphy Town, Abaco.

Lowe said he heard a violent banging on the door, and when he opened it he saw his sister-in-law and several of his neighbors begging him to let them in – their roofs had blown off.

It wasn’t long after Lowe opened his home that his own roof started lifting and part of it blew off.

He said water started flowing into the house and they knew they had to evacuate to another building.

Lowe’s 24-year-old son was born with Cerebral Palsy and is unable to walk or talk.

“I had to pick him up, put him on my shoulder to evacuate the house,” Lowe said.

“And when I step on my front porch, the water was to my chin, deep.  Read more >>
Posted by Derek Catalano at 8:14 AM