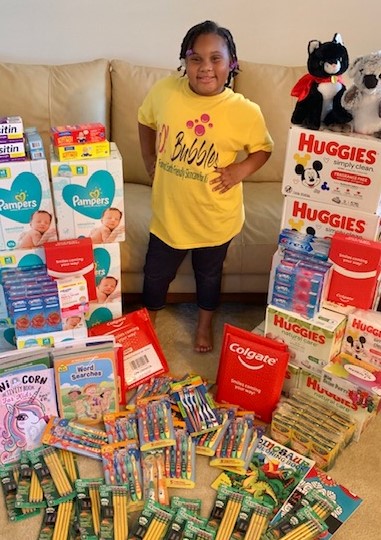 Florida… Michelle Starkes’ central Florida living room is filled with cases of diapers, baby wipes, rash cream, toothbrushes, coloring books, crayons, and other items to be sent to children in The Bahamas who were affected by Hurricane Dorian in September.

A month after the catastrophic storm which crippled Abaco and Grand Bahama, thousands have been left homeless, many hoping for closure as hundreds are unaccounted for. Michelle had initially prepared for the storm in the event it hit Florida but found herself comforting friends from The Bahamas who had relatives and friends in the devastated areas.

Her seven-year-old daughter Gabrielle wanted to know what to do to help and decided to help out children her age and younger who would need to have their personal items replaced. A young business owner known for creating hypoallergenic soaps with her GO! Bubbles Soap brand, Gabrielle used her platform to ask her supporters to help her get donations for the children of the northern Bahamas.

“The kids lost everything,” said Gabrielle. “I wanted to do something for the kids. When grown-ups donate supplies, sometimes they forget about the kids. It’s really sad. It was important for kids to have something just for them. If I was in The Bahamas and I lost everything, I hope someone would donate to me so I can have supplies. I wanted the kids to have the same thing I have. I have slime and coloring books so I wanted them to have it too.”

So far, 417 items have been collected but Gabrielle wants to have at least 700 items to be sent in her shipment so she is continuing to accept donations through October. Her mother said she is amazed to see the amount of people who contributed as well as her daughter’s passion to reach her goal.

“We're extremely proud of Gabrielle,” said Michelle. “She's only seven-years-old but has a wise and kind spirit. Her dad and I try to teach her about empathy and having a concern for people who may not have what she has. When the storm ravaged The Bahamas, she immediately said she wanted to help the kids because she's a kid. Oftentimes, young children are not allowed to volunteer at certain places due to their age, so they lose out on opportunities to serve others. We're glad Gabrielle found a way to help the kids in The Bahamas.”
Posted by Anthony Derek Catalano at 1:10 PM