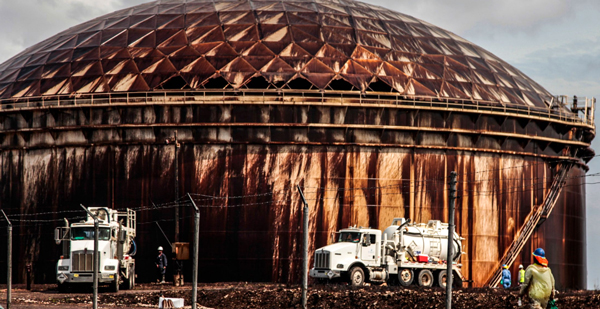 Nearly a million gallons of oil spilled at an Equinor storage terminal during the Category 5 hurricane. The cleanup is ongoing.

SOUTH RIDING POINT, Grand Bahama ― More than three weeks after Hurricane Dorian ravaged the northern Bahamas, the stench of oil was still heavy in the air on this remote stretch of Grand Bahama’s southeast coast. Oil storage tanks at a shipping terminal owned by Norwegian energy giant Equinor sat coated in a layer of crude as if someone had gone at them with an enormous paintbrush.

Dozens of workers, many dressed in plastic hazmat suits, hardhats and boots, were using vacuum trucks and absorbent pads to mop up thousands of barrels of oil that spilled during the Category 5 storm. Other cleanup crews used bulldozers to haul away oil-stained soil and trees. A nearly mile-long swath of forest northeast of the facility remained covered in black sludge.  Read more >>
Posted by Anthony Derek Catalano at 9:01 AM