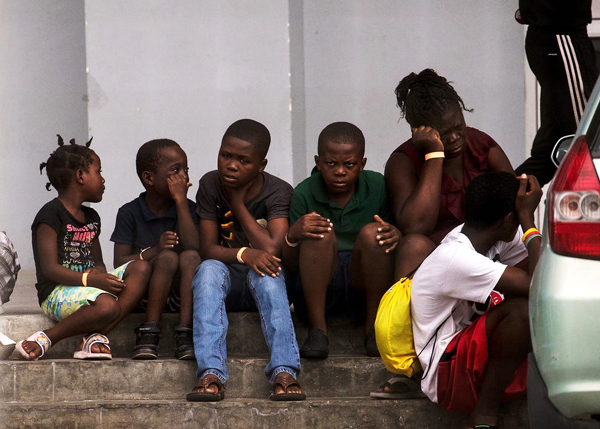 Children and adults affected by hurricane Dorian
line up at the Thomas Robinson Stadium in Nassau.

NASSAU, Bahamas – Stooped and heavily laden, Keri Pierre trudged slowly uphill under blazing Bahamian sunshine. She was running out of time. As the days of her free temporary stay at Paradise Island’s Sunrise Beach Club dwindled, Pierre mounted an increasingly frantic search through Nassau for new lodging, food and clothes.

Harrowing as her life has become, her search is a luxury lost to the unidentified dead whose bodies filled a refrigerated semitruck 103 miles to the north in Marsh Harbour, Pierre’s hometown.

Hurricane Dorian left everything inside the pink house she shared with her family smashed or sodden, so a week after the storm, the 23-year-old, her mother, six young siblings and a nephew decamped to the unscathed capital city. Her father, Kelly, stayed behind to guard the ruined homestead.

As her family joined the wave of about 14,000 Dorian-displaced refugees, Pierre was left to figure out how to get the little ones, including a deaf sister with autism, to school and how she might find a job. The Marsh Harbour insurance office where she once worked no longer exists. “I never thought in a million years, I’d be in this situation,” Pierre said as she hauled a black plastic bag of Salvation Army clothes back to the family’s room.  Read more >>
Posted by Anthony Derek Catalano at 8:19 AM