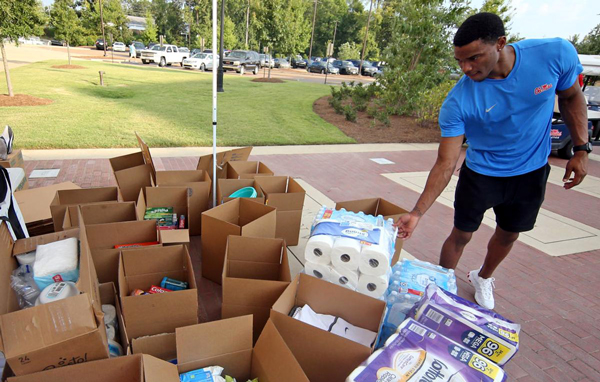 Ole Miss basketball player Franco Miller Jr., a native of The Bahamas, helps with the Rebels hurricane relief drive for his native country.

OXFORD • Sammy Hunter has been away from the Bahamas for almost four years. Emotionally he’s never left.

He hopes to return one day and build a life.

A lot of building will have to take place between now and then after the Bahamas were hit hard by Hurricane Dorian on Sept. 1-2.

Hunter, an Ole Miss basketball freshman, watched in horror as the storm lashed out against the island nation initially with Category Five winds.

“I actually have cousins that lost their home. It was pretty bad to watch. When I heard that I was devastated. Knowing I couldn’t help was bad for me. Hopefully next time I’ll be there to help,” Hunter said.

The storm became personal for Ole Miss basketball, both men’s and women’s, which have a strong Bahamas influence.  Read more >>
Posted by Derek Catalano at 5:43 AM