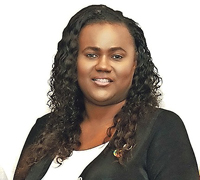 THE Bahamas Christian Council has used “trickery” and encouraged violence against the country’s lesbian, gay, bisexual, transgender and intersex community, instead of rejecting continued injustices toward the minority group as the organisation is mandated to do.

This assertion came from Alexus D’Marco, chair of the Bahamas Organisation of LGBTI Affairs, and an organiser of a pride parade slated for next year. BCC president Delton Fernander on Monday told reporters the organisation would not support the event, adding there were plans to host an opposing rally to make its position known.

He told the media that in the aftermath of devastating Hurricane Dorian, now is not the time to “play games with our faith”.

Further, he said, the church would be asking Bahamians to choose a side and likened the plans for the pride parade to a “Sodom and Gomorrah” moment.

The comments drew criticism from Ms D’Marco who said yesterday it opened the community to added violence and tensions at a time when it already faces these injustices.  Read more >>
Posted by Derek Catalano at 5:59 AM