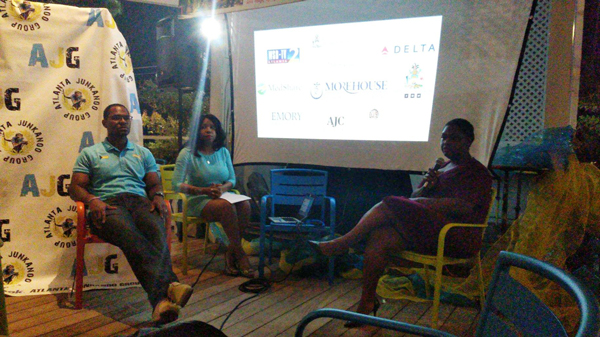 Arthia Nixon interviews Atlanta-based Dr. Roland Hamilton, Jr and Dr. Shaneeta Johnson as they shared their stories of being on the ground in the northern Bahamas after Hurricane Dorian at the Atlanta Junkanoo Group’s fundraiser.

Atlanta, Georgia… During a recent Atlanta Junkanoo Group fundraiser that raised over $2,500 for Hurricane Dorian victims, two Atlanta-based Bahamian doctors detailed all they encountered after landing on Abaco and Grand Bahama in the aftermath of the storm.

The event was held at Bahama Breeze in Duluth, Georgia on Sept. 30, 2019 and attracted scores of Bahamians and friends of The Bahamas. In addition to volunteering with the consulate and coming together to raise awareness within the Atlanta area, the AJG will be holding multiple drives to collect more supplies to send to The Bahamas.

Bahamas Consul General to Atlanta, Astra Armbrister-Rolle provided an update as to what her office is doing to ensure the donations reach those in need. She noted that the city of Atlanta has pledged to do what they can, incorporating Grand Bahama and Abaco as sister-cities. 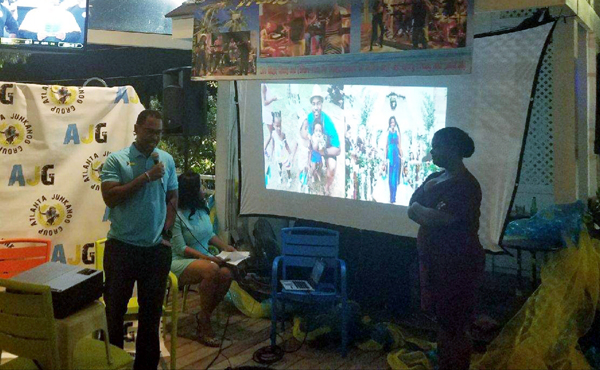 Bahamian doctors in Georgia Dr. Roland Hamilton, Jr and Dr. Shaneeta Johnson are interviewed by Arthia Nixon during a panel discussion as a part of the Atlanta Junkanoo Group’s Hurricane Dorian fundraiser at Bahama Breeze Duluth.

While the evening had its festive moments, complete with a rushout by the Atlanta Junkanoo Group, attendees were enthralled and emotionally moved when Atlanta-based Bahamian journalist Arthia Nixon led a panel discussion, asking Dr. Roland Hamilton, Jr and Dr. Shaneeta Johnson to share their experiences with the deadly storm. Johnson is an Associate Professor at Morehouse School of Medicine and Director of Minimally Invasive, Robotic and Bariatric Surgery while Hamilton is a Neurosurgeon at Northside Hospital.

Hamilton’s brother and sister-in-law were stationed as doctors in Marsh Harbor, Abaco when Hurricane Dorian hit and acted immediately as truckloads of injured people were brought to them for assistance. Hamilton was in South Carolina at the time and rushed to get to the affected areas as soon as he could, noting that he had to see for himself that his brother was okay. He also shared some slides of his family, in times before and after the storm.

“It was far more than I thought it would be,” he said. “I prayed. I thought of my own family. I thought of other people. I just had to do something and as soon as I was able to go I got there…We’ve had storms but we never had something like this. It is historic. This is going to take generations to recover from.”

Hamilton and his wife Ashley have spearheaded several fundraisers and as AJG members, they have further collected tons of donations to send to The Bahamas.

Johnson’s colleagues assisted her with medical supplies and she landed in Grand Bahama within days. She said she was devastated as soon as she landed at what remained of the airport but rushed into action to see where she could help. She described not being able to work from the Rand Memorial Hospital due to flooding and driving through the communities to check the status of survivors.

“There was a woman, her mother and children parked outside of a house that had nothing left but a wall with a scripture on it,” she said. “The woman was so grateful and asked me to check her mother’s blood pressure… And at the gym in Nassau, to see strangers packed so tightly after being evacuated really does something to you. We had to set up there as well. There were so many with needs. One lady stands out in particular - she is far along in her pregnancy and she survived the storm but her six-year-old was killed, and she is homeless. We tried to help her in order to help her baby but the grief and stress is just too much.”

Hamilton agreed, saying that he commends all who are doing what they can because something of this magnitude has never occurred in the Bahamas. He also touched on the subject of so many missing and deceased and the closure that some families desire to have, saying that people have to grieve in order to move forward with their lives. 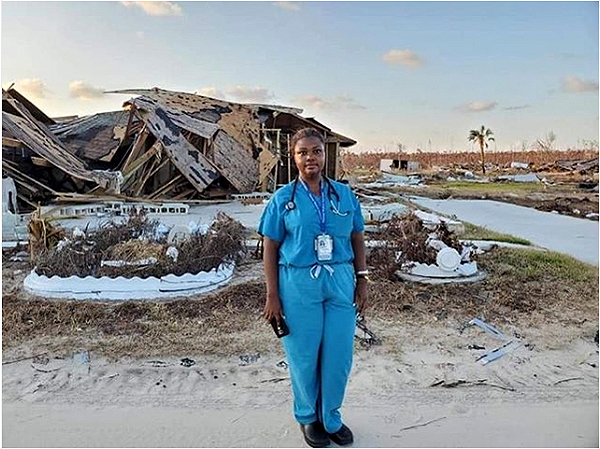 Both doctors encouraged people to continue to help as the journey to recovery will be ongoing, adding that the help can come in the form of donations, volunteerism, sharing stories and even by praying.

“It was a successful event and we are most gracious to Star Legg and Nona Jones for allowing us to come to Bahama Breeze, Duluth to host the event,” said AJG executive officer Nadia Fountain. “Even tonight, we had so many people who saw live videos, social media updates, or people who were just passing by who wanted to offer some assistance to help and we are just so grateful to know that they are thinking of those affected in the Northen Bahamas as a result of the storm.”
Posted by Anthony Derek Catalano at 6:23 AM