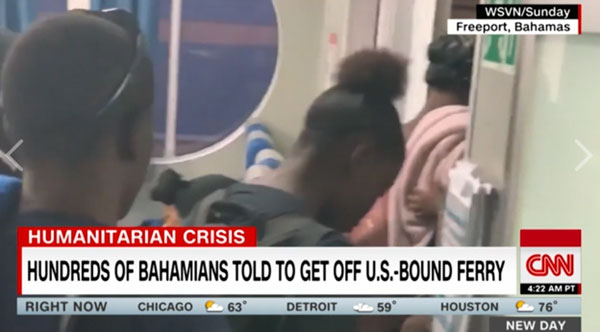 Washington(CNN) President Donald Trump seemed to contradict his acting Customs and Border Protection head Monday over what would happen to Bahamian refugees landing in the US without proper documentation.

Trump told reporters outside the White House that anyone seeking refuge in the wake of Hurricane Dorian "needs totally proper documentation."

In particular, Trump expressed concern over "people going to the Bahamas who weren't supposed to be there."

"I don't want to allow people that weren't supposed to be in the Bahamas to come into the United States including some very bad people," he added, referring specifically to gang members and drug dealers who fled to the islands.

It was not immediately clear what Trump was referring to.  Read more >>
Posted by Anthony Derek Catalano at 5:26 PM