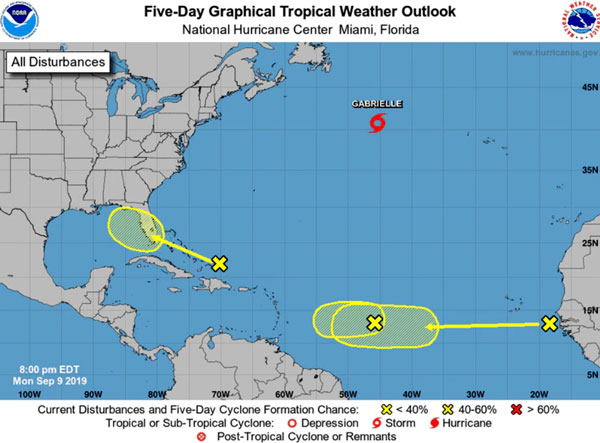 Tropical Storm Humberto will be the next named storm, and it could form from a new system that popped up this weekend and is projected to move over the Bahamas and Florida.

A second tropical wave that is approaching the Caribbean, and a system forming near the coast of Africa could also become a tropical depression in the next five days.


The system closest to Florida is a set of disorganized showers and thunderstorms north of Hispaniola and east of the Bahamas. Its five day track could bring it over the Bahamas and over Florida and then into the Gulf of Mexico.

The immediate threat of tropical depression formation is prevented by strong upper-level winds, but the NHC puts a 20 percent chance of that within five days.

“Environmental conditions could become a little more conducive for development when the system moves into the Gulf of Mexico over the weekend. Regardless of development, this disturbance will produce periods of gusty winds and locally heavy rainfall across the Bahamas through Thursday, and across Florida on Friday and continuing into the weekend,” the NHC said in its 8 p.m. advisory.  Read more >>
Posted by Anthony Derek Catalano at 6:20 PM