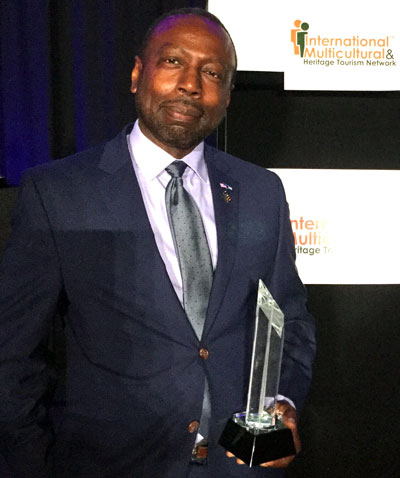 Linville Johnson, responsible for the Multicultural Department of The Bahamas Ministry of Tourism and Aviation is pictured with his Apex Award, received from Black Meetings and Tourism's Magazine for his outstanding contributions to the Hospitality and Tourism Industry. Photo by ExclusiveAccess.Net

FORT LAUDERDALE, FL –July 28, 2019 – Linville Johnson, a Sr. Executive of The Bahamas Ministry of Tourism and Aviation (BMOTA) has joined a privileged list. The group includes Tourism Ministers, Governors, CEO’s and Presidents of major national organizations and associations who are all among past recipients of the coveted Apex Award, presented annually by Black Meetings and Tourism Magazine.

Johnson, currently responsible for BMOTA’s Multi-Cultural Market development, was one of the recipients of the Award at the recent Annual gala culminating the National Association of Black Hotel Owners, Operators and Developers (NABHOOD) and the International Multicultural and Heritage Summit and Trade Show at the Marriott’s Biscayne Bay Hotel, Miami, Florida. 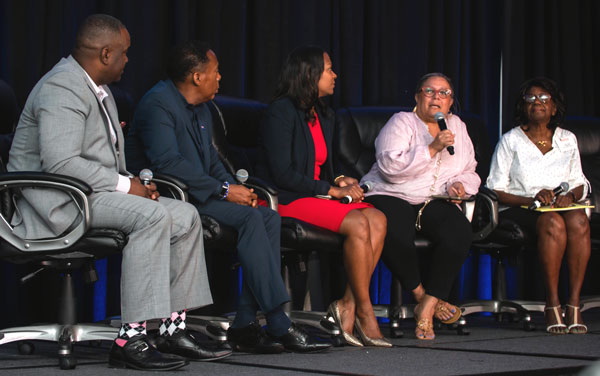 Janet Johnson, CEO and Executive Director of The Bahamas Tourism Development Corp (TDC), represented The Islands Of The Bahamas on a panel at the recent International Multicultural and Heritage Tourism Network Conference in Miami, Florida.  The topic of discussion was How to Develop An Effective Multicultural and Tourism Program that Helps to Grow the Minority Business.  Johnson is pictured seated second from right. Photo by ExclusiveAccess.net

The Florida International University alumni was awarded for his “Distinguished Service” in the Hospitality and Tourism industry.   His career to date has spanned more than three decades and includes the beginning of his career at the former Britannia Beach Hotel, Paradise Island, Nassau. In his years with Bahamas Tourism He has successfully managed the organization’s Tourist Offices in major U.S. cities including Los Angeles, Chicago, Detroit, New York and Miami.

Some of the highlights of Johnson’s lengthy career with BMOTA includes his creation and development of the organization’s Religious Market with the help of deceased Bahamian televangelist, Myles Munroe and well-known Bahamian evangelist, Neil Ellis. 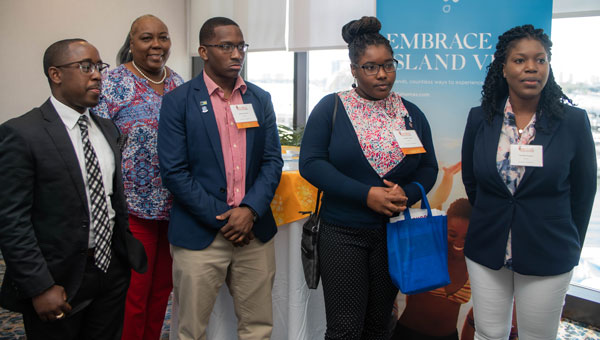 Pictured are Bahamian students who were in attendance at the recent Annual Summit and Trade Show of the National Association of Black Hotel Owners, Operators and Developers and the International Multicultural and Heritage Tourism Network in Miami, Florida. Photo by ExclusiveAccess.net

Johnson also was one of the pioneer’s with BMOTA’s Latin American Market and assisted in the development and growth of the market within the organization.  He was also responsible for the formation of BMOTA’ s Vertical Markets strategy that started with some 12 markets and was later narrowed down to six areas which now include, Fishing, Boating, Diving, Private Flying, Religious Markets and Weddings and Honeymoon.

The Sr. Tourism executive in promoting tourism to The Islands Of The Bahamas, have worked with large groups and organizations across the U.S.  Black Enterprise, The National Urban League, The National Coalition of Black Meeting Planners and the National Black Caucus are a few of the major organizations that Johnson has worked closely with. 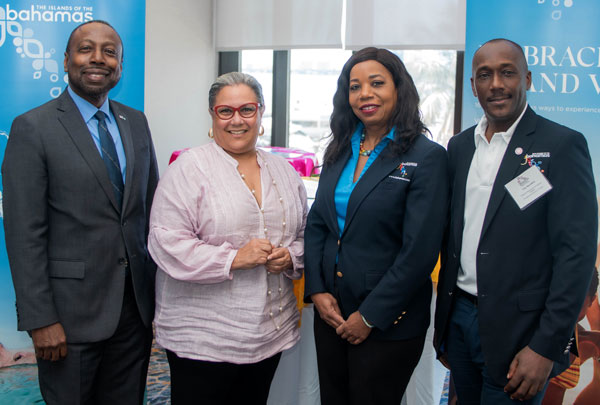 During Johnson’s leadership stint with the Religious Market, The Islands Of The Bahamas played host to some of the most influential spiritual leaders in the Christian faith such as T.D. Jakes, Rod Parsley, Benny Hinn, Tony Evans, Paula White and Promise Keepers International.

Recognizing Johnson’s expansive contribution to BMOTA the Deputy Director General of Tourism, Ellison ‘Tommy’ Thompson said, “Linville has indeed provided outstanding service to the development and growth of tourism to The Bahamas from across the USA.  He has served in numerous capacities with The Bahamas Ministry of Tourism and Aviation in Nassau and in cities across the U.S. over the past few decades and this award is a great way to recognize his continuous long and dedicated service in our field."

Johnson’s hard work was also recognized early in his career when he received a Ministry of Tourism Sales Person of The Year Award, that was given to the Sales Representative whose territory showed the greatest increase in sales for a designated period.

A resident of Coral Springs, Florida, Johnson holds a Bachelor’s Degree in tourism marketing and hospitality management from Florida International University. He is currently pursuing graduate studies at the University of Miami and the University of Pittsburgh.
Posted by Anthony Derek Catalano at 8:39 AM