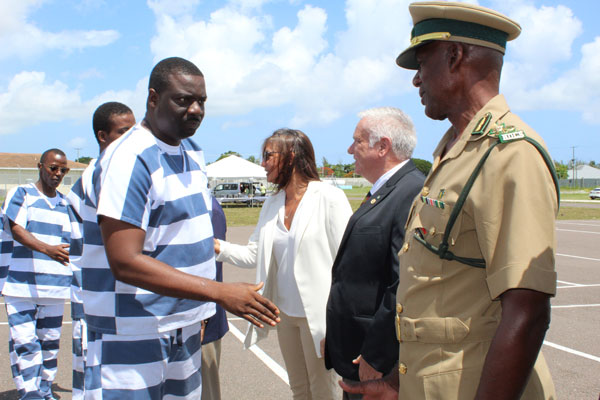 Inmates who were a part of the third cohort of the $3.4 million Citizen Security and Justice program graduated after being trained in fundamental skills of eight disciplines. Shown here greeting a few of them during the ceremony held on the grounds of Her Majesty’s Prison are from left to right: Inter-American Development Bank Country Representative, Daniela Carrera-Marquis; Bahamas Technical and Vocational Institute (BTVI) President, Dr. Robert W. Robertson and Commissioner of the Bahamas Department of Corrections, Charles Murphy. Photos: BTVI

The Bahamas Technical and Vocational Institute (BTVI) has reached the half way mark of training 600 inmates in several disciplines that are expected to assist with their reintegration into society.

The Citizen Security and Justice program is a part of a $3.4 million component of an Inter-American Development Bank-financed joint venture with the Ministry of National Security and BTVI.

The program recently graduated 92 participants, who were a part of its third cohort of inmates. They were trained in fundamental skills of electrical installation, carpentry, plumbing, auto mechanics, masonry, garment manufacturing, barbering or introduction to computers. Overall, 320 inmates have gone through the program, which began in December 2018.

Commissioner of the Bahamas Department of Corrections, Charles Murphy, noted that those engaged in training while in prison seldom, if ever, return there.

“Now that you have been equipped with relevant tools for your survival in society we hope when you leave these grounds, you will be engaged in gainful employment,” said Mr. Murphy.

IDB Country Representative, Daniela Carrera-Marquis, encouraged the inmates to take advantage of the skills learned and to become lifelong learners.

“All of us need to continue learning and improving our skillset. You will eventually exit these gates…it is important that you demonstrate you have a skill and can proactively contribute to society,” said Ms. Carrera-Marquis.

She added that all eight of the disciplines taught are “incredibly useful” to The Bahamas. 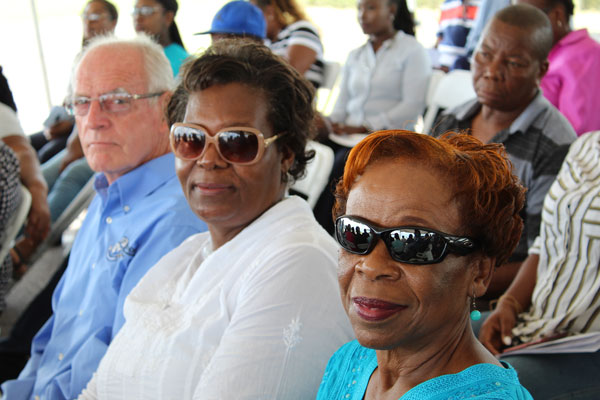 Instructors of the Bahamas Technical and Vocational Institute (BTVI) have now trained three cohorts of inmates of the Citizen Security and Justice program. Ninety two inmates recently graduated, bringing the number to 320 of the targeted 600. The program is financed by the Inter-American Development Bank and includes BTVI and the Ministry of National Security. Shown here from left to right are Graham Thornley, carpentry; Ida Symonette, barbering and Shirley Pearson, garment manufacturing.

Additionally, BTVI’s President, Dr. Robert W. Robertson expressed hope that the skills will help the inmates reinvent themselves and become adequate contributors to society upon release.

“Clearly, inmate education has become a priority for the government. Inmates, you have been given a second chance to prove to yourself that you are bigger than your past and that your mistakes or misfortunes do not control your destiny,” he said, resulting in an eruption of applause from the audience.

“You can now leave this correctional facility to become the person you aspire to be… your return to society will surely aid in decreasing the skills gap in the country,” he added.

Also addressing the inmates was Acting Permanent Secretary in the Ministry of National Security, Eugene Poitier, who said the certificates do not guarantee anything as there is still work to be done.

“It’s not a magic piece of paper. You have to add the magic to the paper. It doesn’t replace good manners, common decency, hard work and good work ethics…the magic is the determination to keep on fighting, even when all looks hopeless. You have to reconnect to humanity,” stated Mr. Poitier.

Describing the program as a “bold initiative,” participant, Jerome Woodside, said he believes it will positively impact those at the prison.

“At times it was kind of hard,” said the young man who was trained in barbering, “but I said, ‘You’ve come a long way. Don’t let this opportunity pass you by.’ The sky is the limit and nothing is stopping me from reaching the pinnacle of life,” he concluded.

Each cohort is trained over a 10-week period in the selected discipline.
Posted by Anthony Derek Catalano at 8:19 AM