How Long Will the Bahamas Tolerate Carnival Trashing its Waters and Polluting its Air? 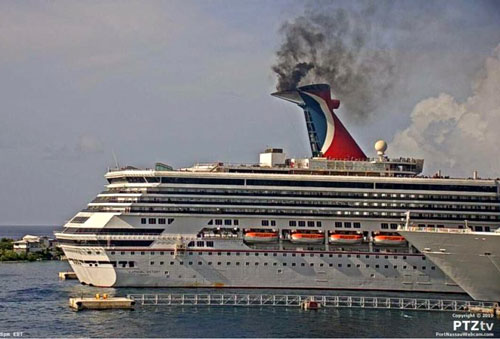 A week ago we posted an article which showed the Carnival Victory belching thick black smoke into the air while it was still moored at the Princess George wharf in Nassau.

Carnival was also recently caught illegally burning heavy fuel oil in protected areas on 19 occasions, according to the Miami Herald. The Herald has consistently covered the DOJ’s investigation into the environmental record of the cruise giant which has resulted in $60,000,000 in fines in the last three years.

Carnival also admitted that in July of 2017, the Carnival Pride ship dumped 15 pounds of food waste into Half Moon Cay, the company’s private island used as a beach for cruise passengers. The DOJ’s investigation revealed that the Carnival ships often discharge large quantities of plastic items mixed with trash and garbage, in Bahamian waters among other locations. The Miami Herald also reported that the majority of the 500,000 gallons of treated sewage illegally dumped from Carnival owned ships occurred in Bahamian waters.  Read more >>
Posted by Anthony Derek Catalano at 6:29 AM