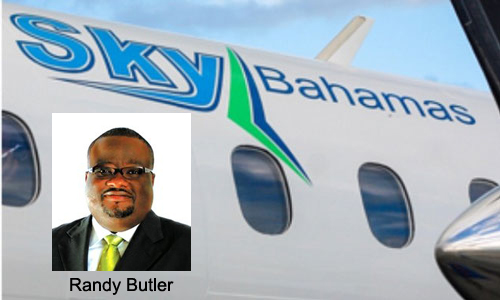 Sky Bahamas’ principal yesterday said the airline and its 63 employees are fighting for its survival following a two-week long grounding due to delays in a key permit’s renewal.

While Sky Bahamas’ air operator certificate (AOC), the approval required for an airline to carry fare-paying passengers, had expired on June 29, 2019, Captain Butler said normal protocol was for the previous licence to remain in effect until the new one was granted provided it was not “suspended, revoked or terminated”.

Producing a copy of Sky Bahamas’ just-expired licence to show it contains such a clause, Captain Butler revealed that he was called to a July 9 meeting at The Bahamas Civil Aviation Authority where the regulator “came up with some ridiculous findings” in relation to a recent safety inspection conducted on the airline.  Read more >>
Posted by Derek Catalano at 8:08 AM