Author of Christian relationship guide says he has lost his faith 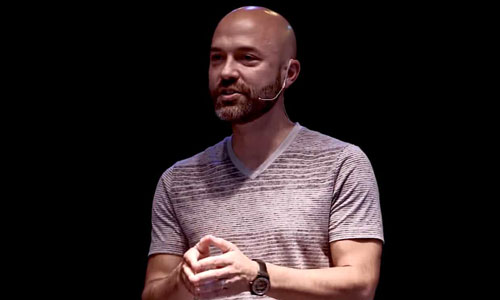 Joshua Harris apologised to LGBT+ people for contributing to a ‘culture of exclusion and bigotry’. Photograph: TEDx Talks

The American author of a bestselling Christian guide to relationships for young people has announced that his marriage is over and he has lost his faith.

Joshua Harris, whose biblical guide to relationships I Kissed Dating Goodbye sold nearly 1m copies around the world after it was published in 1997, has also apologised to LGBT+ people for contributing to a “culture of exclusion and bigotry”.

In his book, Harris, a former pastor at a US megachurch, urged young Christians to reject dating for “courtship” under the guidance of parents and observing sexual abstinence. Young couples should not kiss, hold hands or spend time alone together before marriage, he said. Dating was spiritually unhealthy and a “training ground for divorce”, the book argued.

The book, written by Harris when he was 21, was widely circulated within evangelical Christian youth groups, helping to promote a “purity culture” and vows to preserve virginity until marriage.  Read more >>
Posted by Derek Catalano at 6:34 AM